On the Eve of Halloween 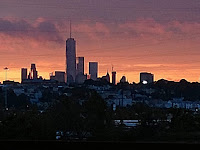 I had a "sunrise" seat on the early morning train and watched what seemed to be a scene from a Halloween movie unfold over the Hudson. Usually, I just follow the crowd up and down the stairs and through the turnstiles, like lemmings to the trains, but perhaps inspired by that orange glow burning in the morning sky, I noticed the people in my cohort.
There was the girl with bright orange hair, an over-sized jacket and what appeared to be Doc Martens boots?  Are they back in style, I wondered or were they from her mom's attic?
There was the man with tousled hair, who looked like he had just rolled out of bed and onto the train, sitting next to a man with monogrammed cuff links peeking from behind a suit that appeared tailored just for him.
There were a flock of boys in uniforms, one a foot taller than others, heading to school.
There were people napping, nodding, watching their phones, listening to iPods, reading the Wall Street Journal, pursuing social media, and playing Candy Crush, but there was no one talking.

As we went underground, I realized there was an endless sea of diverse, different but seemingly peacful zombie like creatures heading into the bright orange sunrise, on the eve of Halloween.

Was I the only one noticing and feeling a bit uneasy?

It rained EVERY Tuesday in September resulting in wet (ruined) sandals, wet (ruined) shoes, wet (ruined) umbrellas, wet (ruined) laptops and phones and messy (puddle-filled) commutes via buses, trains and cars! SO as September came to a close, I invested in rain-gear for my feet and a new umbrella.  I was confident that I'd get prepared and then the rains would stop.  After all, there was NO snow at all during that winter after I got a snow blower!


The sun was out when I headed into the city on the first Tuesday in October and it had all the appearances of a lovely early-fall day. I didn't need to worry about those clunky water shoes so I donned my new slip-ons and left the rain jacket at home!  Interestingly, my grad students also noted the Tuesday without rain situation, happily!

However, a few hours after immersing ourselves in miscue analysis and collaborative models there were 4 severe storm warnings and 2 tornado watch warnings on my phone. The sky was ablaze as I left the city and at one moment I wondered if it was THE storm or fireworks somewhere? The rain started slowly but increased in intensity, volume, and duration.  I knew that it was rain and yet it felt as if I was being pelted with rocks!  I knew it was thunder and yet if sounded as if the skies would open an swallow me hole.  I knew that the rain would eventually stop and yet, I wondered if I would have to wait till morning to finally be home!  There was hydroplaning and sloshing and flooding in spots.

Yes, there have been years of bone dry earth and water rationing as we endured droughts.  Yes, there are still areas of our country and the world that would welcome a deluge, Yes, I know now that buying rain shoes and an umbrella was not enough of a deterrent for Mother Nature,  So, next Tuesday, I will wear my rain shoes, carry an umbrella, hope the rains go elsewhere, but be prepared for rain.  Can you hear me Mother Nature?