#SOL19 Should I Save this For SOL?

As I turned the corner, I saw something moving in the road. It was too small to be a car and I guessed it was a trash can that had gotten loose! The intense wind was knocking branches from trees and requiring drivers, like me, to grip the wheel with both hands even at 15 mph!

I could have changed blocks but I decided I had time to be a good citizen and secure that can. I continued two blocks....until I got close enough to see what it was....my heart rate quickened and I realized it was a receptacle not for trash but for a baby! The wind was blowing it away and I could only see the back....What if there is a child in it, I wondered as I tried to get as close enough to catch it!

Fortunately, it was just an empty stroller that had a "Wizard of Oz" type experience!

After  I secured that stroller to a nearby yard with a note explaining how it got there, I drove off wondering, "Should I save this small moment for March Madness?"

I guess I'm getting a bit anxious as well as a bit excited for the March SOL Writing Marathon. Hope to see you!
Posted by drferreriblogspot.com at Tuesday, February 26, 2019 5 comments:

#sol19 I Climbed the Grand Canyon 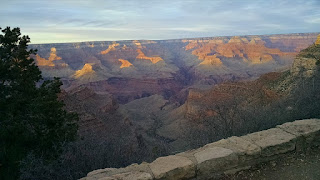 Four years ago today, at just about this time, I reached the top of the Grand Canyon after a grueling, but, empowering, climb all the way down one day and all the way back up the next. At the time, I remember my legs were exhausted and I numb. There were more than a few moments along the way when my hiking partner and I were not sure we were going to make it to the top. At one point on the way back, a Park Ranger suggested we spend the night as she was CERTAIN we could not make it.

But, we did make it back to the top in spite of a grueling climb and an ankle sprain. Before we left school for our Winter Recess, one of our students offered us, "Good luck," followed by his thought, "You are going to need it." We did need that luck, but we probably GOT more empowerment out of that trip than we could have ever imagined.

Since that February hike, I've changed where I work, where I live and where I find personal enjoyment. I lost my best friend and partner.  I lost my Mom, my Aunt and my role of caregiver. I've earned new roles: Meme, Meem, Professor, Dr. F., neighbor, friend.........

I am not sure I would have had the strength to persevere through the hard times...unless I had climbed down and then back up the Grand Canyon....but then I will never know....but I did climb the Grand Canyon....and I am SO GLAD I did.  I guess I needed that "Good luck" wish and the empowerment of that hike.....

I was not thinking of Valentine's Day when I laid out my black polka dot shirt; instead I was thinking of the "sunny and 45" forecast.

Then, on the 6:49, I say next to a woman dressed in red from her head to foot. That's right.  Red hat, coat, pants, scarf, and boots. I smiled as I sat down and asked the obvious question, Valentine's Day?

Then, on the Avenue, the street vendors who usually sell scarves and umbrellas were out early with red balloons and flowers. They each assured me that they had just what my Valentine needed. I thought of giving a snide remark about not having a Valentine..... but decided that would do no good.

Then, as I walked between schools in the warm February sunshine, there were endless couriers with flowers on foot, on bikes and in carts.  They each looked as if this was the longest day of the year. Stress rather than love pulsed through their veins. Yet, the stress may have been associated with the though of how many deliveries they might make before the sun set on this red flower filled day.

There were glimpses of of children on Facebook, Twitter, and Instagram dressed in hearts and families celebrating what I've often denounced as a Hallmark" funded holiday.......

Yet, by noon, I wished I was wearing red and remembered that if I wanted flowers, candy or a new book, I'd have to buy it myself.  I was feeling the love....

So, I picked up a book (or two) during a quick swing by B&N before I splurged on a deluxe salad to go (with sun dried tomato) and smiled as I remembered the wisdom of my mother in law.  "Treat yourself," she would implore me, "no one else knows exactly what you want.".

Red, red, and a sea of memories overpowered those black polka dots.
Posted by drferreriblogspot.com at Thursday, February 14, 2019 No comments:

Thanks to the TWT Slice of Life Challenge, I'm writing about what I am remembering today.

I remember nothing but excitement at the announcing of a snow day on the radio (Yes, in the olden days, you had to listen every half hour for that day-changing announcement). Perhaps a few I Love Lucy reruns and some time in the snow would lead into couch time with a good book.

I remember the relief when the snow chain call (Yes, in the olden days, we created snow chains and you prayed the teacher ahead of you would not just roll over and fall back to sleep.) would awaken me in my pre-dawn slumber to the quieter than usual day ahead.

I remember relaxing the usual television standards for my children on snowy days and realizing they had found Jerry Springer's guests wrestling their boyfriend's mother's sister's double-timing brother!(Yes, in the olden days, we had to rely on the limited offerings on ABC, NBC, CBS and PBS,)

I remember the texts that arrived after I had already left in the snowy darkness that I received only after getting stuck in traffic! (Yes, sometimes the decisions are hard to make). 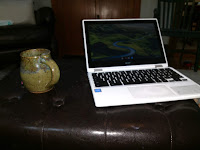 I remember lots of long snow-day afternoons filled with shoveling, a few very scary-snow-day commutes, and one snow day when I went for a walk in the foot-high-snow because the feuding children inside were driving me out of my mind. (Yes, sometimes my children tried to make me crazy)

I also remember mugs of hot tea, hours of catching up on reading, writing, closet cleaning and naps.

Yet, I realize that my own memories are more positive than negative and on snowy-icy-nasty days like today, I am remembering those teachers, such as my colleagues in NYC, who rarely get snowy icy days off.  I am remembering those who work in stores, hospitals, hotels and restaurants, who do not get snowy days off. (Yes, there are many who will have a slip-sliding commute hom.)

Drive/walk carefully, if you must.  I'm remembering snowy days are more stressful than those recent snow day musical announcements would suggest!

I went through the learning disability simulations on this PBS site (look under the Attention and Reading tabs) as I was preparing to teach a class about Universal Design for Learning (UDL) adaptations. It was a scary reminder of the perspective of so many of our students - of all ages.

I must have been thinking about learning differences as I drifted off to sleep because I woke up in a panic, dreaming I was in a large auditorium with the room spinning around and the Ted Talk garbled! I think I screamed, "Make it stop," but perhaps I only dreamed that too.

I guess I needed the reminder of how necessary it is to adapt our learning for the diverse learners in all our classes. Thanks again PBS for providing life-long learning.

Posted by drferreriblogspot.com at Friday, February 08, 2019 No comments:

She arrived early,
In a hurry, determined,
Teeny, tiny,

Safely,
A grandchild.
A miracle.

The first time,
I could feel
That section of my heart
Focused on love
Grow as I watched my child
Hold her daughter.
Three days later,
My heart stretched until it hurt
As my child
Held his son.

Fifteen months later,
I breathed in that
Newborn smell, again,
I could feel my heart grow
Three sizes that day.
A few months later
I watched a big sister
Fall in love and
My heart filled my chest.

And now,
Cecelia
Has caused my heart
To expand,
yet again.

Perhaps
These miracles have contributed
To a few extra pounds.....
Or perhaps they are
Reasons to head to the gym
And to eat healthy
And to give praise. 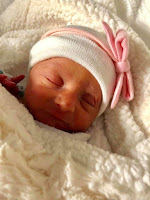 A Teacher Makes a Difference

We gathered
To celebrate her life and legacies
Among them...
A passionate teacher,
Nearly a thousand students,
It's hard to fathom the impact, influence,
She made a difference.

I knew her
In another era
When the Gessell Developmental Screenings,
Determined whether to "red shirt" children.
When new ideas were challenging
The status quo in education.
She embraced Child-Centered Education.