More than one time, he went on adventures with his beloved family. There was a lot of hiking, swimming, fishing, canoeing, and exploring even when he was visually and hearing impaired and crippled with arthritis is in later years.
More than one time, he got loose and some of us went up and down the street looking for him while others drove around and around yelling for him. Some of us were sure he had run into the woods chasing a deer or a cat or a car, and would be lost forever.
More than one time, he got worried  when he was left behind and tore down his grandmother's (and his great-grandmother's) curtains as he struggled to find his parents sure that he had been abandoned forever. His mother became a master at in the moment, on-site curtain repair.
More than one time, he ate chicken, even though everyone else ate primarily a vegan diet. That is what you do when you know he needs protein to keep his diabetes in check.
More than one time, he accepted the new people and pets his mom brought home. There was the Dad who liked to hike and was great at snuggling. There were grandparents, aunties, uncles, cousins and friends. There were babies who appeared small and helpless but cried all night and soon became toddlers who crawled and pulled his hair. Those toddlers became children who laid on him and sometimes accidently stepped on him. There was a stray cat who needed a dog-dad's love and and a crazy puppy who terrorized him, trusted, and later reminded him to breathe.
One time, he was in wedding pictures, as the bridal party prepped and the bride, in full regalia, walked him down the street moment before she walked down the aisle. Some people even wondered if Jake had been instrumental in making that event happen!
One time, he was in a shelter, not sure how old he was or what the future would have in store until someone came along and offered unconditional love for all of his days.
One time, there was a dog named Jake who mattered to all who knew him.  He left us this week, but will continue to inspire us to live intentionally and love unconditionally. 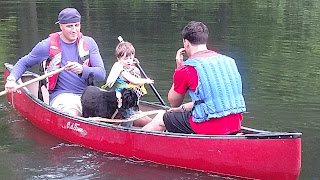 Posted by drferreriblogspot.com at Friday, October 02, 2020 No comments: