"What's in that box?" my little friend asked as we cleaned the garage.

"This was my Barbie case  when I was little, but I think the Barbies are your Mom's," I said remembering my original Barbie with the black and white striped suit and most anything of interest in modern times had been taken by my niece long, long ago.

I opened the box cautiously not sure if I would find...something requiring me to put the whole box in the garbage. But, the inside was as it was left when some little cousins played with the Barbie remnants long after my little girl, had abandoned them. Truth be told, my daughter (and I) were really not "into" Barbies and usually played with them when others were visiting.  I guess you could say we were "social" Barbie girls!

Back in the house, I got rid of a Barbie with a broken neck and cleaned others while my little friend excitedly explored the old dolls and new to her outfits. On a rainy afternoon after months of quarantining, Barbie put a smile of my little friend's face.

While I've never been a big Barbie fan, the memories of styles from Barbie's early days (ugh) along with the prices of outfits ($1.50-3.00) that somehow survived intact for decades put a smile on my face as well. Perhaps I should rethink the timeless and ageless Barbie? 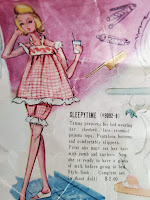 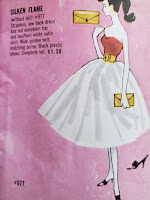 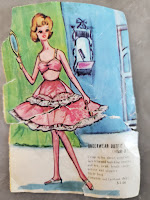 Posted by drferreriblogspot.com at Tuesday, May 19, 2020

These were definitely not the Barbie outfits I grew up with but I am loving seeing the different styles. The second picture reminds me of something The Marvelous Mrs. Maisel would wear! What a nostalgic slice.

This is such a fun post! I recently found my old Ken and Allen when I was cleaning in my Mom's basement. It was like finding old friends. My Grandma made all of my Barbie clothes and she was very well dressed. I think the Toy Story Movies made Barbie popular again for a while - she is so funny in those. Thanks for a fun post.

I’m with you. I never bought a single a Barbie for Isabelle. (I was kinda into them as a kid, but the adult version of me couldn’t / can’t stand them.) Alas, I’m glad they brought joy to your little friend!

Never had a Barbie. My mom felt that Tammy was more modest, so I had a Tammy case and beautiful clothes that my oldest sister made for her.
My daughter had Barbies, but she loved playing with my Tammy.