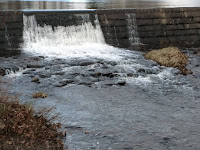 I often walk to a nearby park for exercise and an opportunity to nourish my mind. It's a park with quite a story!

It was designed by the son of Fredrick Olmsted, designer of Central Park in Manhattan. Amazingly, my little park was started in 1930 and completed in 1932 during an era when the nation was in the Great Depression.


I can do a more name dropping because prior to the American Revolution, The Lenape tribe of Native Americans lived here. 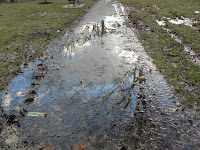 During the Revolution, General Lafayette's troops were stationed along the banks of the brook. He even had headquarters in what is now my park!

After a winter of rain, snow, freezing and thawing, the paths are partially flooded and the dam is overflowing. The trees are still empty but I know I will find pussy willows blooming soon. Perhaps it is the water pouring over the dam or the endless babbling brook or perhaps it is because so many people have "walked" this path for so many years, but I never feel alone as I walk through the park.

Posted by drferreriblogspot.com at Tuesday, March 05, 2019

Love the way you end this post: "...but I never feel alone as I walk through the park." So cool to know that this park was designed by the same person who designed Central Park! Thanks for sharing this!

It’s great to have some historical context to a place you enjoy. As your so aptly said - you never feel alone.

I love walking in historic places (even if it is just historic to my city and/or town). It feels like you are walking along with the past. Thank you for sharing!